What online petitions are really good for

“Clicktivism” and other internet-fueled activism have long been criticized as a way for people to feel that they’re taking a stand on important issues, when in reality they’re just poking ineffectively at their phone or computer. When I began working for a digital advocacy nonprofit in 2015, I certainly had my skepticism about the model. But as I worked in the space for over two years, I learned that though they can’t change the world alone, digital campaigning organizations fill a specific niche and fulfill their role very well.

As I see them now, digital campaigning organizations have three primary roles. First, is that they can summon a deluge of vocal criticism for brands, politicians, or other actors that are deeply invested in their public image, creating a sense of accountability. Second, they can bring national or international scale attention to small local battles. And third, they are some of the most effective fundraising nonprofits, enabling not only their activities, but those of other organizations too.

So what’s the deal with all the petitions?

It’s true that there are very few decision makers that care how many people “signed” an online petition — there’s too little accountability for the names and the number of signatories. But online petitions themselves still serve three important purposes, which is why they’re the bread and butter of digital organizing. First, once a petition has enough signatures, it allows campaigners to deliver the petition, creating a spectacle at the office of their target, and usually getting attention from local or even national media, and thereby putting the target’s name in the press in connection to the campaign. 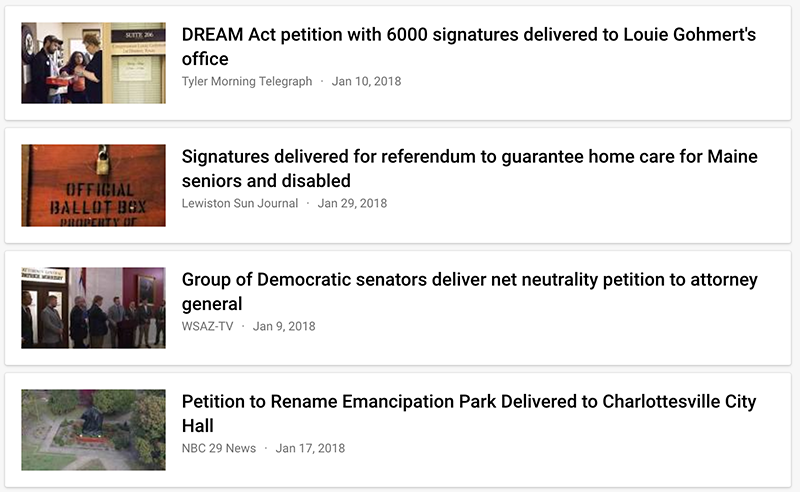 Secondly, and most banally, petitions serve as a growth engine. Sign a petition and you’ll likely be asked next to share the petition on social media. Each friend who clicks through and signs the petition is now on the organization’s contact list, growing the digital campaigners’ reach. This model, emailing people who then sign and share petitions, prompting their friends to sign and thereby begin to receive emails, has been a massive growth model for many advocacy organizations.

Third, and most importantly, online petitions serve to aggregate email lists of people who care about specific issues. By signing a petition, you add yourself to a list of people that care at some level about a certain campaign, a list of people that are most likely to take the actions that can actually effect change — applying pressure and donating money.

Where the real power comes from

More publically, large brands seem to become immediately apoplectic when their facebook page is overrun with hostile commenters demanding answers on their supply chain. It may seems bizarre that they would even care, until you realize the massive resources that these brands pour into social media management and brand curation. It takes a sustained and varied campaign, but I have been deeply impressed by the sense of outrage and scrutiny I have seen digital campaigners subject their targets to, simply by directing passionate people to call, email, tweet, write letters, and post on target’s facebook pages.

For example, in 2015 my organization was working with a coalition of partners to convince Starbucks to buy palm oil only from sustainable and ethical sources. The company was largely ignoring the campaign, but when over 18,000 people commented on Starbucks’ Facebook page, they caved and arranged a meeting with their director of ethical sourcing. Several meetings and months of pressure later, including videos, tweet surges, and in-person petition delivery, Starbucks substantially improved their palm oil policy.

This sort of attention can be very effective on campaigns that are already covered in the press and have received national or international attention, but it’s even more impressive when used to escalate small local resistance against a much larger entity. In the cases I saw most often, communities would organize against extraction or water, fuel, or precious metal in their area. It dramatically alters the equation when the local opposition is suddenly echoed by tens of thousands of people around the world who want to escalate the situation.

I watched this pattern play out several times during my tenure, including a handful of consistent campaigns against Nestle. Several times, Nestle’s water bottling operation would sign a deal with a local or regional government or water authority to allow it to pump and bottle water from an aquifer, usually for only a few dollars per million liters. The digital campaigners would amplify the local resistance to the project and bring national level scrutiny, until the extraction deal was dropped or re-negotiated.

The final unique capability of digital campaigning organizations is their ability to fundraise. As online donations have superseded direct mail as the most effective method for nonprofits to raise money, digital campaigning organizations have not only the interfaces and infrastructure to receive donations, but the ability to contact large numbers of sympathetic people and solicit donations for specific causes and actions. Digital campaigning orgs can raise funds to sustain their own staff, but they can also raise money on behalf of other organizations or local groups. This money enables entire suites of splashy campaigning tactics toward the same fundamental goals: raise the risks and PR costs for companies or public officials until they’re willing to change their behavior.

It doesn’t work every time, and with so many different entities advocating in so many directions, it’s very hard to attribute impact to any one organization. But as I watched the campaigns of my organization and others unfold, I was deeply impressed by the effect that digital campaigning can have, well beyond the boundaries of the Internet.